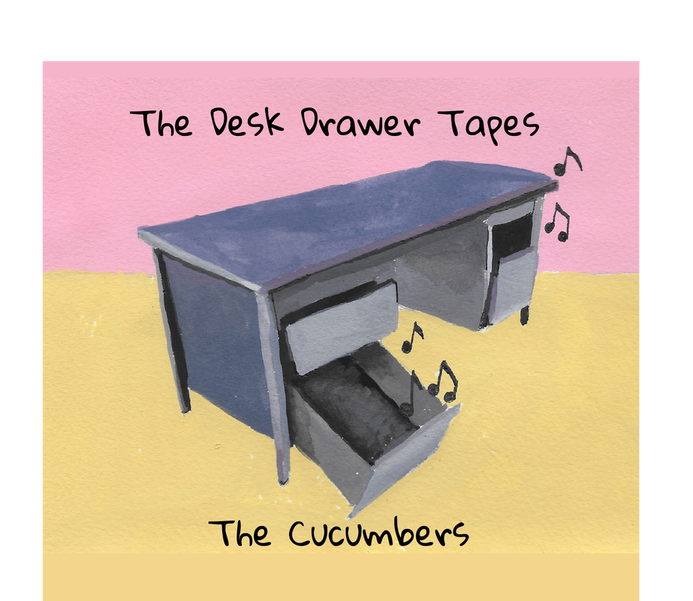 “The Desk Drawer Tapes” is a collection of previously unreleased songs recorded by The Cucumbers from 1988 to 2005.

“These recordings literally came out of my top desk drawer,” says Deena. Like many others during the COVID lockdown months she turned to the long put off tasks of cleaning and organizing.  “Instead of finding old papers and pencils to discard I found old recordings.”

“There were cassettes and disks with tracks we’d nearly forgotten about, a bunch of them finished recordings, fully produced and some of them even mixed,” says Jon. “Why didn’t we release them at the time? Some were probably too out there for whatever label we were on. Some of them didn’t fit with the other songs we were doing at the time. Some of them, we don’t remember why.”

The collection spans the eclectic styles the band explored over years with a revolving cast of bassists, drummers and others. With drummer Yuergen Renner and bassist John Williams, the rhythm section on the band’s 1987 eponymous release on Profile Records, they brought in a horn section and created quirky danceable grooves (The Boss’s Song, Do It Yourself, You Are the Match, recorded in 1988).

With drummer Dave Ross and bassist Kurt Wrobel, the band tried a grungier hand on their trademark bright indie-pop sound (I Am So Ready, an outtake from the band’s 1996 Total Vegetility sessions).

In 2002, with Kurt and drummer EdNo, they went in several directions, from moody (What Would You Do) to dreamy (Beauty from Afar, Our Love Is What We Are) to driving, emotions-on-the-sleeve rock (Handle with Care, Shout to Be Heard) and even a little country swing (How Far Can You Go).

Returning to the studio in 2005 with Kurt and drummer Steve Villano, Jon took a rare lead vocal turn on a ballad (True for Me) and Deena enlisted the help of trombonist Ben Williams to bring back the horns on the soul influenced Still Thinking of Midnight.

“The collection is a reminder that a band is a blend of musical personalities, a meeting point, and we were lucky to play with a lot of really wonderful musicians over the years,” says Deena.

The recordings document the band from 1988, when they toured nationally, through 2005, when they finally stopped playing regularly as a foursome. Deena went on to release several solo albums and singles, along the way writing several songs with Tennessee-based lyricist David L. Graham, including two on this release (How Far Can You Go, Still Thinking of Midnight).

In 2010, Jon and Deena released SingSOS, an album of songs they co-wrote with lyricist John O’Neil about life with a son on the autism spectrum. The album featured recordings of the songs by Jackson Browne, Marshall Crenshaw, Dar Williams and many others.

In 2016, the Cucumbers released the Fake Doom Years, a digital remastering of their earliest vinyl-only recordings on legendary New Jersey label Fake Doom Records. One of those songs, Don’t Watch TV, was featured in the 2021 feature film “The Little Things,” starring Denzel Washington.

Jon and Deena have also released several singles Rent Party (2013), Light Shines Through (2014) and Love and Joy (2019). Deena released Some Days (2020) a two-song single with The Poor Man’s Opera and is currently working on an album featuring  long-distance songwriting collaborations around the world as well as her experimental home recordings Jon’s creative energies meanwhile have gone into fiction writing. He has published short stories in several journals and zines, winning a literary prize along the way, and is completing a novel based on his colorful family history.

Together they currently play in the Campfire Flies.

John Williams and Yuergen Renner currently play together in the Los Traficantes del Amor – and the occasional Cucumbers reunion show. Steve Villano is busy recording and touring.  EdNo is deeply involved in the Chattanooga, TN music scene.  Kurt passed away in 2012.

“I mostly like moving ahead, because I like to keep writing” says Deena, “but when I came across the recordings I had to pause. I felt I had to look back to help make way for the new.”

“There are more desk drawers and lots more tape and discs. But we’re pretty sure this is it for the finished, fully produced recordings that never saw the light of day,” says Jon. “I’m really proud of this collection. I actually think it’s one of our best releases, even though it was obviously never conceived as an album. Bands always say their latest release is their best – probably because their latest sounds the freshest. Some of these recordings are pretty old, but they sound fresh to us. It’s a kick that other people can have a listen now.”

Please check out the CREDITS page to find out more about the wonderful people who contributed to this project.


Many thanks to Jim Testa at NJ.com, Cindy Stagoff at NJArts.net and John Gentile at PunkNews.org for the wonderful feature articles about this project.  AND thanks to Mike Marrone From The Basement, Joe Belock Three Chord Monte, Joe Wolfe-Mazeres  Ear to the Ground Radio, Gary Gone at Cygnus Radio, Robert O'Donnell and Kate Sobolewski at Homegrownradionj.com, Lazlo at Blowupradio.com, Peter Bochan "All Mixed Up" Lee Mrowicki at RadioJersey for the airplay!